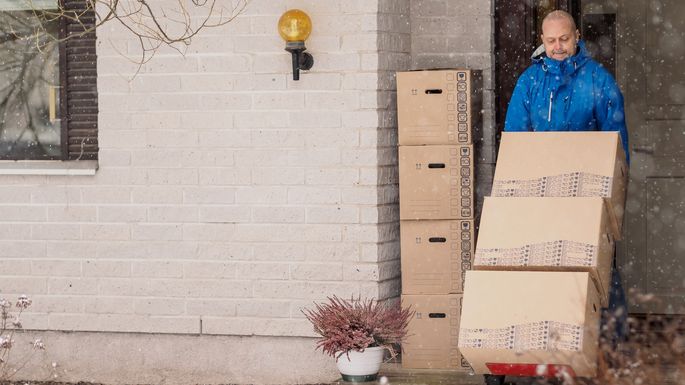 OK, maybe that’s a tad melodramatic, but not much. Basically during one particularly lost week between Christmas and New Year’s Eve, I moved from the mild climes of coastal Georgia to mountainous Utah. And I learned a lot—about myself, my aversion to driving massive moving trucks on icy roads, and what not to do when you move cross-country during winter. Here are a few of my more chilling revelations, in the hopes that they can help you prepare if you find yourself in my shoes.

1. Never drive the moving truck yourself—but if you must, keep it small

I have never once reserved a moving truck or trailer and received what I asked for at the location I requested. Never. When I showed up to collect my reasonably sized 15-foot truck, I was duly informed that my request couldn’t be completed, but would I like a 20-foot truck for the same price instead?

No, I absolutely would not. Larger trucks are less aerodynamic, burn more fuel, and are much harder to maneuver, which means more time spent, higher costs, and greater stress over a winter move. But given no other option and a limited amount of time to pack up and head out, I drove off with what was offered.

Complicating matters was that I was making this trip alone. I’m no stranger to cross-country travel: I’d already driven my car to Utah and had made similar journeys for a previous job. However, driving a slow, unwieldy moving truck through difficult weather and over new terrain is probably an adventure better undertaken with company or left to the professionals.

2. Bad weather can wreak havoc with your perfectly planned route

There are a few ways to drive from the East Coast to the West. Generally, the southernmost routes are the best bet for avoiding winter weather hazards. Unfortunately, there are approximately zero ways to get to Utah without crossing a few mountains—and in December, this almost always means driving through snow.

The week I was traveling, unexpected storms hit both Interstates 40 and 70, so I had little choice but to take I-10 through Florida, Mississippi, Louisiana, and many, many miles of Texas. This was all fine until the fourth day of the trip, when I turned north through New Mexico and into Utah. That day, the mountain passes received the first big snow of the season.

I was able to stick to my original plan, but not without a lot of anxiety, which taught me a valuable lesson: During winter, roads hit with storms will close down entirely, which means unexpected detours and more hours, even days added to your travel time. And that’s a real hassle, but what can you do? Make sure to build some inclement weather wiggle room into your schedule.

Another thing to note: Cellphone service can be spotty and gas stations and service areas are few and far between in remote areas, so it’s smart to bring a real, fold-out paper map, just in case your Waze app wigs out.

3. Make sure to dress and pack for cold weather, even if you’re just sitting in a car or truck

When I flew back to Georgia to spend Christmas with my family and pack my truck, I left all of my winter clothes and footwear in Utah. Surely, I thought, I could survive a few days without my puffy jacket, warm gloves, and furry boots because wasn’t I just going to be driving all day inside a truck, anyway?

What I didn’t account for was needing to pump gas in temperatures so cold and winds so fierce, my fingers went numb after less than a minute of exposure. I didn’t prepare for the reality that moving trucks—which generally lack four-wheel drive, chains, and snow tires—aren’t built for snowy mountain passes, the safety of which are questionable even in the most capable vehicle. I also should have bought an ice scraper, just in case. Instead, I battled limited visibility thanks to frozen bugs that simply smeared and refroze across my windshield every time I tried to use wiper fluid to clean them off. It was no match for a winter move.

4. Prepare to change your plans based on what Mother Nature has in store

Overall, my winter move taught me that Mother Nature does not care in the slightest whether you have somewhere to go. You have to be prepared to admit defeat, to wait it out, or to alter your plans. You have to be humble. Anger, aimed up at the snowy sky above, is wasted energy you should really save for once you finally do arrive—because eventually, you will.