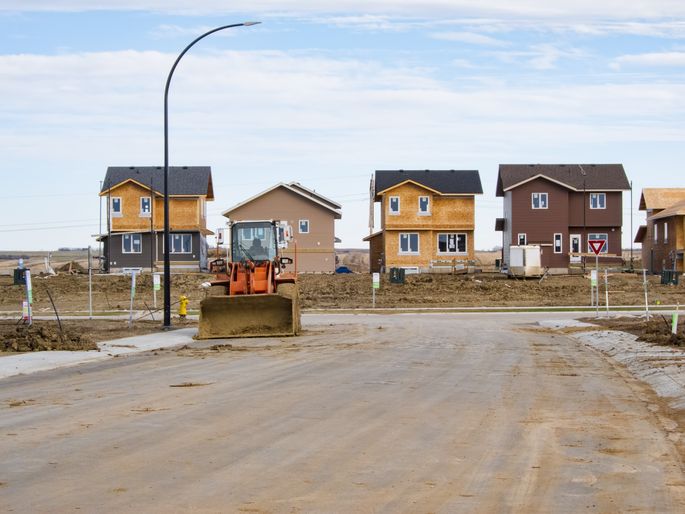 In spite of all the house hunters out there clamoring for homes to buy, there won’t be a surge in the number of newly constructed abodes hitting the market anytime soon.

Builders received fewer permits to put up new homes in September, according to the latest residential sales report jointly released by the U.S. Census Bureau and U.S. Department of Housing and Urban Development.

Permits, which are a good indicator of the number of new homes to come, fell 4.5% from August to September and were down 4.3% from September 2016, according to the seasonally adjusted numbers in the report. (The numbers we looked at have been smoothed out over a year to account for seasonal fluctuations in the market.)

The drop was mostly in the number of condo and apartment buildings slated to go up. Some of the decline was due to Hurricanes Harvey and Irma. The storms halted a lot of new construction in the Houston area and parts of Florida and shifted some of the focus toward rebuilding instead.

But it wasn’t all bad news. Permits to construct single-family abodes, those sorely in-demand residences, were up 2.4% from August and rose 9.3% from the previous year. Meanwhile, permits for condos and apartment buildings fell 17.4% month over month and plummeted 25.3% year over year.

“If we step back and look at the bigger picture, annual changes, we’re still seeing increases on the single-family home permit and construction side,” says Chief Economist Danielle Hale of realtor.com®.

“Single-family construction is going to lead to more homes on the market. … New construction that will bring more options to buyers is really important.”

Monthly housing starts, which refer to homes on which construction has begun, were down 4.7%. But they were up 6.1% annually.

That’s great for buyers who can afford a new home, many of which are custom-built, and all of the brand-new appliances, finishes, and features they come with. But new residences typically cost more than existing ones (which have previously been lived in). That’s because land, labor, and materials costs are high, and it’s often difficult for builders to get financing on the projects.

For example, the median price of a newly constructed home was $300,200 in August, according to the most recent data available from the U.S. Census Bureau and the U.S. Department of Housing and Urban Development. That’s 18.4% more than the median cost of an existing home, which was $253,500 in August, according to National Association of Realtors® data.

The fewest new homes were finished in the Northeast, at 83,000, where land is more scarce and often pricier than in the South and Midwest. That plummeted 41.1% from August and 14.4% from September 2016.