Will Single Buyers Capture a Greater Share of 2017 Home Sales?

According to data from the National Association of REALTORS®, the share of single buyers was on the decline from 2011 to 2015, as there was more competition in the market by investment and vacation homebuyers. The share of single buyers rebounded in 2016, however, possibly signaling new developments for the future. But first, let us look back at historical trends.

NAR tracks market changes in two of its flagship surveys, the Profile of Home Buyers and Sellers and the Investment and Vacation Home Buyers Survey. In 2016, the Profile of Home Buyers and Sellers celebrated its 35th anniversary, collecting data since 1981 and providing a historical perspective on how the share of buyer types have fluctuated over three and a half decades. Historically, married couples have always captured the highest share of home sales—at their peak in 1985, married couples purchased 81 percent of all homes that year, followed by single females at 10 percent, single males at 6 percent, and unmarried couples at 3 percent.
Since that time, marriage rates have been on the decline. According to the U.S. Census Bureau, in 1981 60 percent of Americans were married,[i] compared to 50 percent in 2016.[ii] As the marriage rate decreased over time, so did the share of married couples purchasing homes and single buyers started to rise as reflected in the graph below from 1985 to 2001. 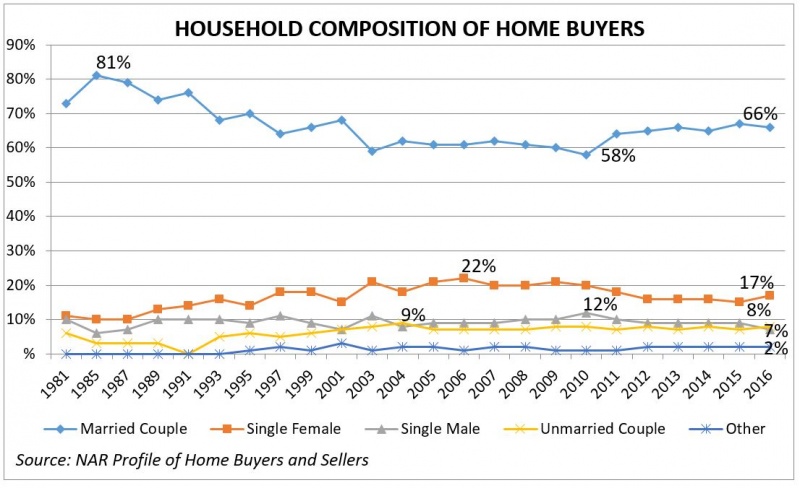 From 2003 to 2010, the share of married couples was at its lowest and the share of single buyers was at its highest. The lowest share for married couples was in 2010 when they captured only 58 percent of home sales. During that eight-year period, their share in the market was between 58 and 62 percent, a significant drop from 81 percent in 1985. Single female buyers were also at their peak. In 2006, the share of single female buyers was at a high of 22 percent. Between 2003 and 2010, they captured 18 to 22 percent of the market.

In 2010, however, there were external factors that also influenced the market. Around this time, the recession hit dampening overall home sales. The U.S. government issued a tax credit to spur first-time homebuyers. The share of first-time homebuyers was 50 percent of the market share in 2010, the highest it has ever been compared to the historical norm of around 40 percent. First-time homebuyers generally include a higher proportion of single buyers, so it makes sense that there was a higher share of single buyers and the lowest share of married couples in 2010 due to the tax credit.

Furthermore, it is interesting to note what has occurred in the market since the tax credit and post-recession period. The share of married couples begins to rise again, starting at 64 percent of the market share in 2011 and increasing to 67 percent by 2015. The share of single female buyers declined in this period as well, from 18 percent in 2011 to 15 percent in 2015.
We know from data outlined in NAR’s Investment and Vacation Home Buyers Survey that low home prices after the recession sparked more investors and vacation homebuyers to snatch up affordable properties, thereby crowding out single homebuyers. According to the report, investment buyers jumped from representing 17 percent of all home sales in 2010 to 27 percent of home sales in 2011. The investment-buyer trend continues over the next few years, although it slowly comes back down. Vacation homebuyers also had a big year in 2014, capturing a 21 percent share of the market—the historical norm had hovered around 10 to 12 percent. 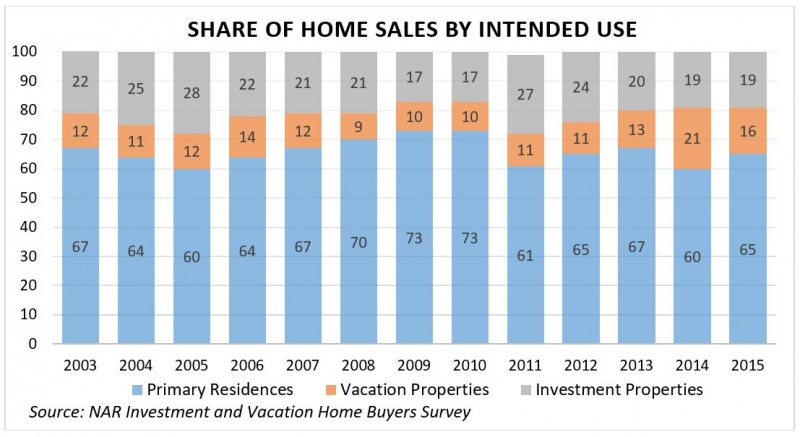 This brings us to 2016, which seems to break with the previous five-year trend of marketshare based on buyer type. The share of married couples went down to 66 percent from 67 percent and the share of single females increased to 17 percent from 15 percent over the previous year. Do these changes in demographics in 2016 signal a new era where single buyers will continue to purchase more homes? Alternatively, will married couples return to the 2015 trend line and dominate marketshare? We shall see at the end of 2017 when NAR releases its next Profile of Home Buyers and Sellers.