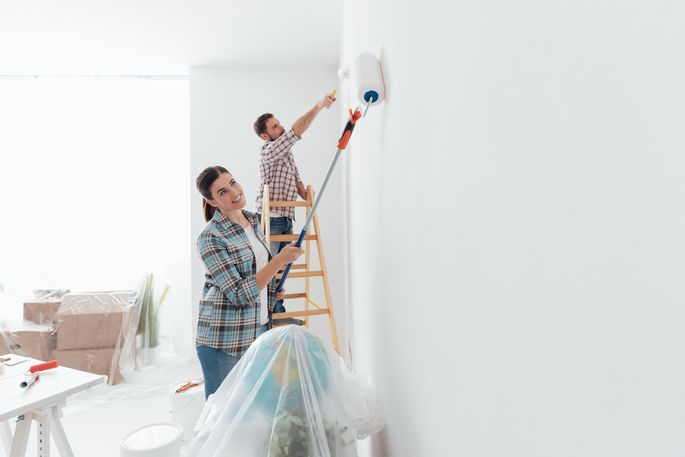 The hottest remodeling jobs of the year aren’t all about installing new kitchen cabinets or countertops, putting an eye-catching backsplash above the stove, or adding a sleek yet functional kitchen island. Instead, 2018 is all about the john.

Nearly a quarter of homeowners plan to remodel their bathrooms over the next year, according to HomeAdvisor’s 2018 True Cost report. That’s compared with just 15% who plan to upgrade their kitchens. (The company, a home services marketplace, surveyed more than 1,000 homeowners from March 21 to March 30. All of the participants completed home maintenance and improvement projects in the past 12 months.)

“There’s a trend of creating a spa feel in the bathroom,” says HomeAdvisor’s chief economist, Brad Hunter, noting that a lot of people are deciding they don’t want a tub, with some preferring a walk-in shower.

“People are putting in speakers so they can have music playing in the living room also playing in the bathroom,” he says. “You can even have a TV built into your mirrors.”

The average bathroom remodel cost an average of $9,724. Project costs ranged from $2,500 on the low end, for refinishing existing countertops, installing new flooring and fixtures, or slapping on a new coat of paint, to more than $24,000 for those going all out for a gut rehab.

Overall, homeowners spent an average $6,649 on improvements to their abodes in the past 12 months, according to the report. About two-thirds of those surveyed expect to spend the same or more over the next year.

Millennials spent the least amount of money on home improvement, at $5,693, but completed the most projects over the past 12 months. That may be because they’re more likely to have purchased cheaper fixer-uppers versus pricier, move-in ready abodes.

“The millennials are really starting to show up on the radar,” says Hunter. But the projects they’re undertaking are a little different from those of the older generations, who tend to have money to spend on fancier renovations and finishes.

“Oftentimes, they’re buying a house that has some cosmetic neglect and they have to do some basic shoring up of the house,” he adds. “They may replace a broken faucet.”

Meanwhile, baby boomers spent the most, at $7,524, followed by members of Generation X, at $6,582. As boomers get older, they’re increasingly thinking about growing old in their existing homes. That means getting their abodes ready with walk-in showers, lower cabinets, and potentially even outdoor ramps in place of entryway stairs, so in the coming years they’re able to stay in them rather than moving into a pricey assisted-living facility or nursing home.

“They’re getting everything working in tiptop condition so that when they’re no longer in tiptop shape, they won’t have to worry about it,” Hunter says. “While they’re doing necessary work, they’re thinking they might as well add a grab bar or putting in a reinforcement to allow them to screw in a grab bar later.”

Homeowners are also investing in inexpensive projects such as painting the interior and exterior of their homes and putting in or upgrading their flooring. This can add to a home’s value, particularly if the owners plan to put it on the market soon.

“Painting gives you a lot of bang for your buck. … It adds to the curb appeal and the salability of a house when it looks fresh,” says Hunter. “There’s [also] a very strong return on investment when it comes to hardwood, whether it’s putting in new hardwood or resurfacing hardwood. … People categorically look at a hardwood floor and say, ‘Wow, that looks beautiful.'”

But the construction labor shortage has also hit the remodeling sector. That means homeowners across the nation can generally expect higher prices and longer waits to get work done. So the key is to get started early.

“The contractors might not even want to take a job if it’s not profitable enough,” Hunter says. “They may say, ‘We can do it, but we can’t even get started on it until August.'”